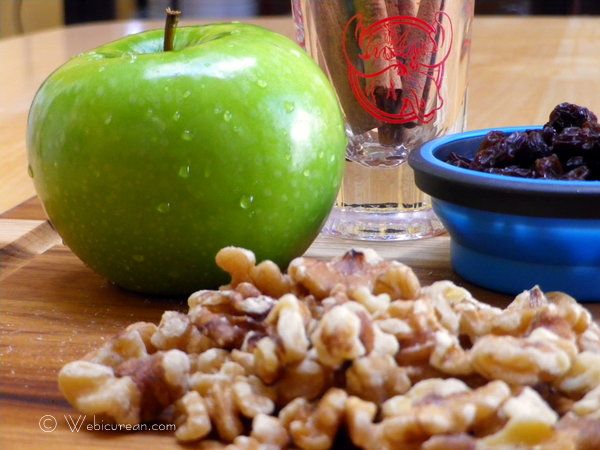 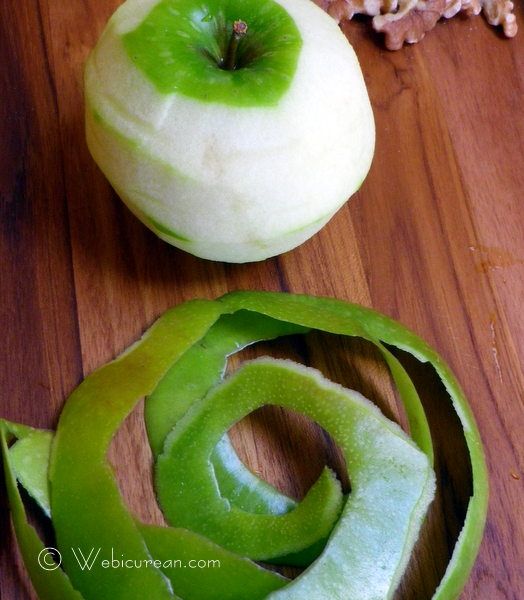 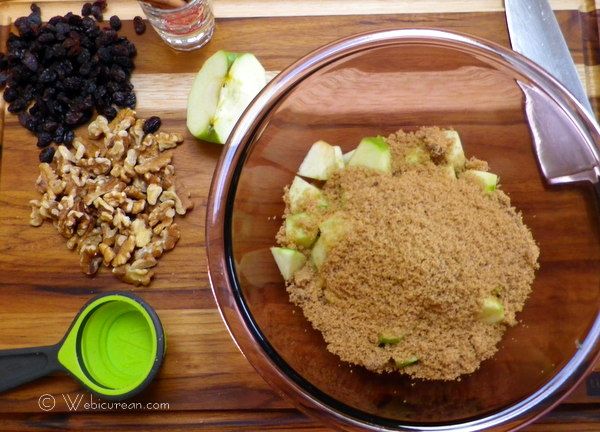 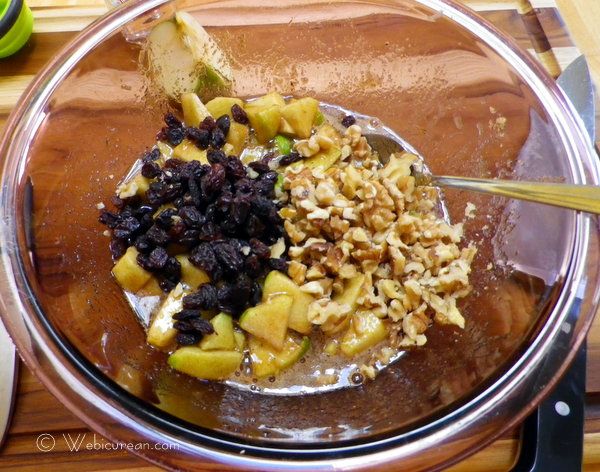 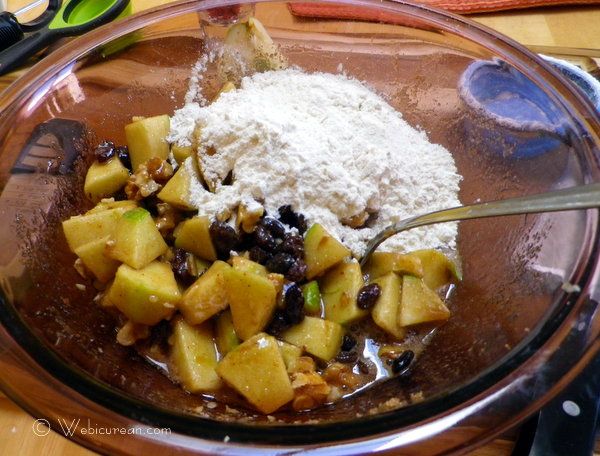 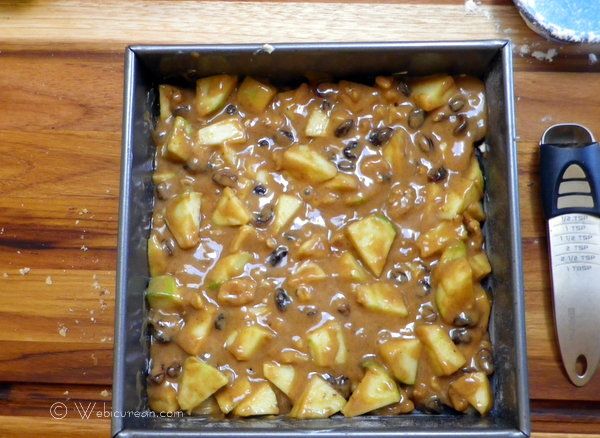 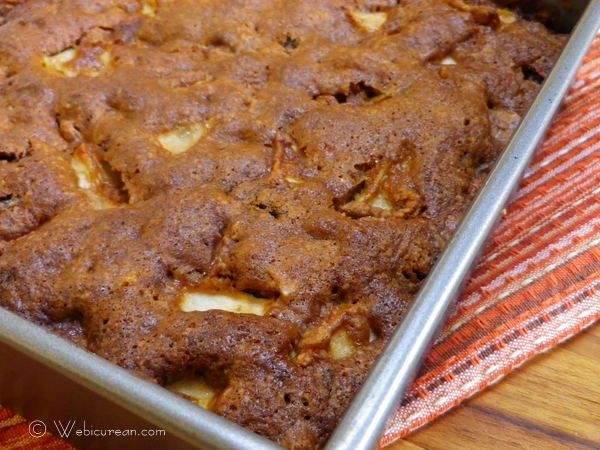 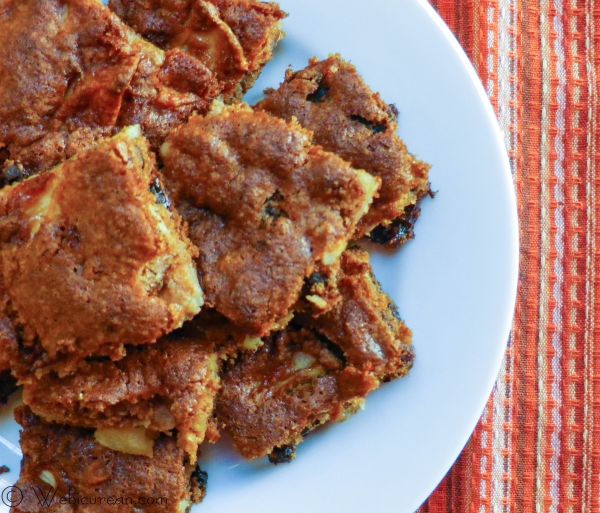 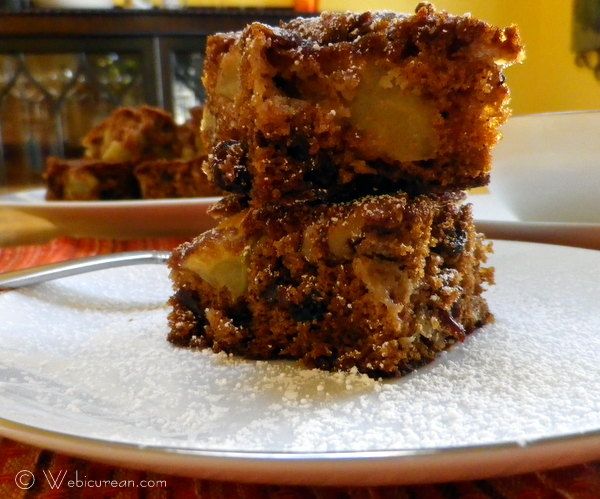 I love your mother’s apple cake. I have a similar recipe that calls it fresh apple cake but whatever the name, it’s delicious!

I think the term “raw” denotes fresh fruit, vs precooked or canned apple pie mix. I don’t think precooking the fruit is so common, however I do have an incredible blueberry pie recipe that cooks the berries first, which creates a dance on your tongue that will disgrace any Old World cotillion.

Back to your recipe, don’t the spices tend to clump when added with liquids? I always add them at least with sugar, but usually sifting them with the flour for a more thorough mixing. I was taught this from Mom, her Dad who had a bakery & restaurant, his wife- my Grandma – who baked with a fistfull of this, a dash of that, and a cup was a coffee cup, and everything was incredible. Her mother baked the same way; I was still hearing stories about her amazing pies and cakes 84 years later from my 96 year old aunt.

Your photo of the finished cake looks just like my fresh apple cake, so they are obviously ‘from the same family.’ That recipe is roughly twice the ingredients, but a Tablespoon of cinnamon & a cup oil, though I reduce the oil to 3/4, or else it’s sort of a glob the next day – if it lasts. Like your Mom, I bake it in a 13 x 9 pan, but at 325 for 40 minutes.
I agree with you, serve it straight, at most a dollop of whipped cream.

You are correct about how the spices should be incorporated, although I have not had any problems doing it my lazy way! Either way, it’s a yummy cake. Seems that many families have something similar in their collections!

My sister forwarded this recipe to me n my other Beautiful sisters. Easy to make, already had ingredients on hand, but Iused red apples n coconut sugar. The taste is/was quite explosive. I forwarded the recipe to other family n friends. Thank you so much!

Just made this morning. So tasty! I used red apples as it was already available. I used coconut sugar instead of brown sugar. I cut regular sugar by half. Amazingly delicious. My beautiful Sister shared with me n my other 3 beautiful sisters. I in turned shared it with other family n friends. Thank you so much.

So glad you enjoyed! It’s a pretty flexible recipe!