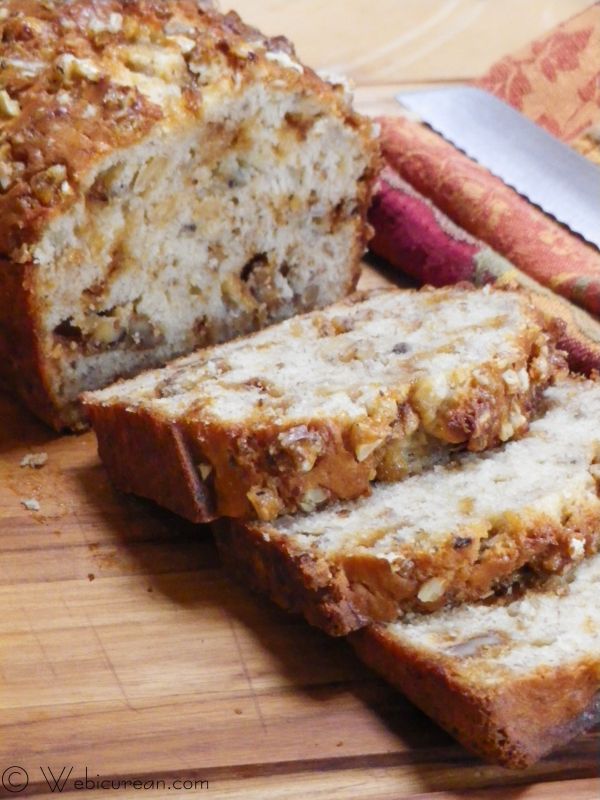 Nothing beats the aroma of baking bread, although I suppose that could be said about most baked goods, not just breads. While nothing pleases me more than warm bread slathered in butter, I don’t do much baking myself. And when I do bake, I mostly stick with simple things such as quick breads and drop cookies or biscuits. Sadly, this has more to with laziness than anything else. Wait for dough to rise? Pass. Roll the dough out? Meh. Shape dough with cutters? Way too much work! That’s why this banana bread is so perfect for me–it comes together quickly and is super moist and delicious. It’s so easy, I decided to kick it up with some candied walnuts. Perhaps I’m not so lazy after all.

Quick breads are named for the “quick” leavening process. In the old days, when it came to baking, yeast was just about the only game in town, which made baking an hours-long process. By the mid-nineteenth century, chemical leavening was “rediscovered” and soon became popular. Certainly, Clayton’s Quaker Cook Book (1883–free Kindle edition) has numerous baked goods calling for either bicarbonate soda along with cream of tartar, or baking powder. Although from Best Recipes for Baking (1907) it’s clear that quality varied greatly by brand: “The strength of baking powder varies so much with the different brands that it is impossible to state how much to use.” Uh, good luck with that!

This particular bread is leavened with baking powder and is mixed using the “creaming method.”Â  That is, the shortening and sugar are creamed/beaten together first before the other ingredients are added. The end result is a light and moist loaf. The addition of the candied walnuts adds a sweetness, along with a nice candy crunch from the walnuts sprinkled on top. This recipe was adapted from Marcia Adams’ Heirloom Recipes, which is my personal favorite after attempting many banana bread recipes in my lifetime.

First, let’s take care of the walnuts–lightly toast them in a medium pan, then set aside. In that pan, melt the sugar until golden brown. Toss the walnuts back in until coated, then spread on parchment paper to cool off. Chop them when ready to use. 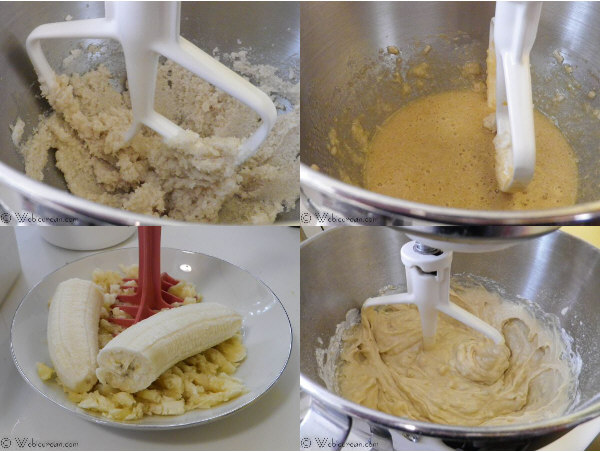 Cream the shortening and sugar until fluffy. Blend in the eggs and vanilla until thick and light yellow. In a separate bowl, mix the flour, baking powder, and salt. Then add them to the sugar mixture, alternating with the mashed banana. 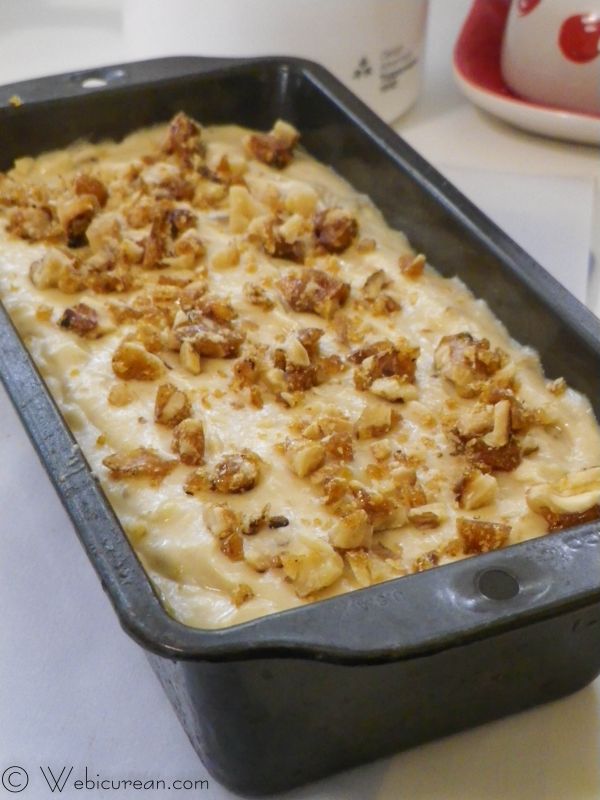 Stir in 1 cup of the walnuts. Then, grease the bottom of an 8-inch loaf pan, and pour the batter evenly inside. Sprinkle the remaining candied walnuts on top. 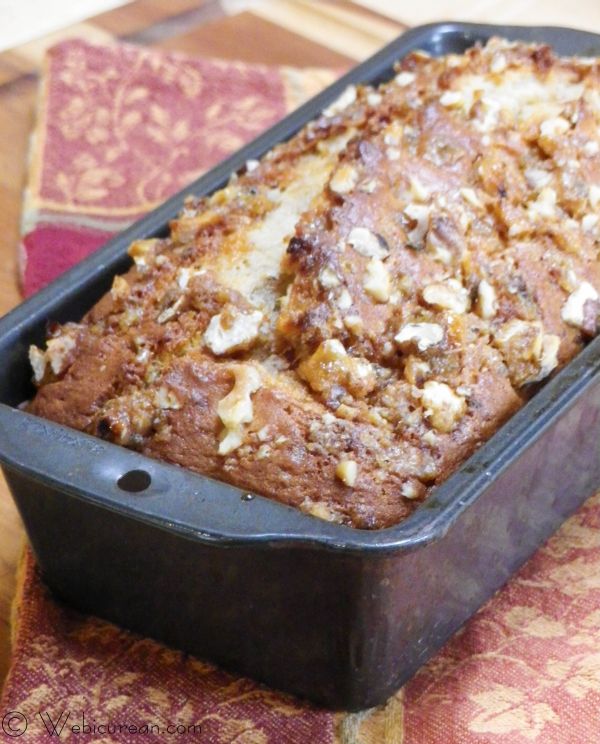 Bake until golden and a toothpick inserted in the center comes out clean.

Serve warm with plenty of butter and a hot cup of tea.

What a lovely loaf! And Marcia Adams was one of my favorites, too. Thanks for referencing my article on the creaming method. =)

Thanks! and you’re welcome! Thanks for having such a detailed post on technique–I love being able to cross-reference stuff like that!

your banana bread recipe sounds really yummy, I am gonno try this over the weekend.

Thanks! I hope you enjoy it as much as we did! Have a great weekend 🙂

I am not the most eager baker myself, so this banana bread recipe might be the right one for me!

Hello–There’s a “subscribe by email” section on the right hand side towards the top of every page. Just so you know, I haven’t updated in a while, so you probably won’t get anything soon. Thanks for your interest!

Would it be possible to substitute butter for shortening?

I’m so sorry I didn’t see your post sooner! Did you try it with the butter? It should be fine, maybe slightly less fluffy, but better flavor.